Team Alberta 14U Girls Come home with Silver from Westerns 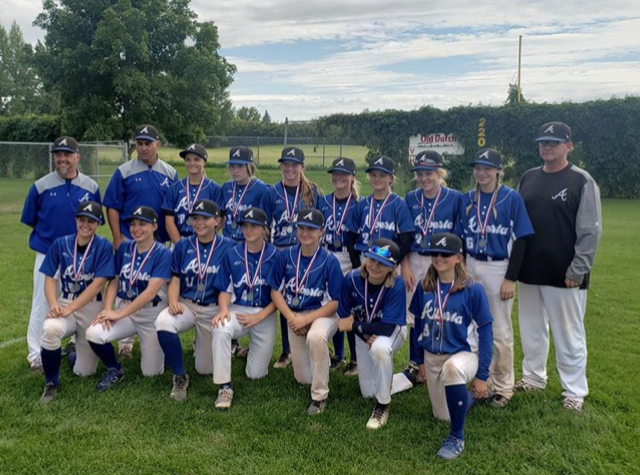 The 2019 Team Alberta squad which competed at the 14U Girls’ Western Canadian Championship in Saskatoon, from August 16th - 18th was truly representative of our province, including players from Calgary, to as far north as Fort McMurray and many communities in between.

With the opportunity to play together in two tournaments in the spring as well as an intensive pre-tournament training, the players and coaches felt well-prepared to compete and perform to their potential.  The pre-tournament training saw the team on the diamond for 27 hours between noon on Friday, August 9th and noon on Monday, August 12th, which included an exhibition game against a Parkland 13U boys’ team.  The coaching staff was very impressed with the way in which the players were able to remain focused and engaged throughout the training camp and knew that it would bode well for their chances the following weekend.

The championship in Saskatoon started off with a very exciting game against British Columbia.  Trailing 8-3 late in the game, Alberta was able to mount a seven run 6th inning to take the lead and hang on to win by the score of 10-9.  “When we found a way to compete, never quit and find a way to win the game against BC, we knew that it could really get us on a roll for the weekend,” said Head Coach Chris James after the tournament.

The team was firing on all cylinders in their second game of the day versus Saskatchewan, scoring eight runs in the first inning and never looking back, in what would end up as a 20-1 win.  One game now stood between Alberta and an assured trip to the final.

Team Alberta came up against a very game Manitoba team in their only game on Saturday.  A seesaw battle ended with Alberta on the right side of a 14-12 final.  Coach James knew this game would not be easy, but conceded that the team played only well enough to win this one.  “It wasn’t the prettiest game that we could play, but it’s the sign of a good team to be able to find a way to win, even when you don’t play to the best of your abilities,” he said.  “We are going to need to be better against Ontario tomorrow.”

Coach James’ comments proved to be prophetic as Alberta came up against a very strong Ontario team in two games on Sunday.  With both teams knowing that they would be playing each other again for the gold medal later in the day, the first game only determined who would be the home team in the final.  Ontario jumped ahead early, but Alberta managed to stick around for the first half of the game,  eventually succumbing to too much offensive talent on the Ontario team.  The final score was 22-9.

In the gold medal game, Ontario was able to score 2 or 3 runs in every inning to eventually walk away with a 12-2 win.  Although the silver medal was not what the players were looking for, Team Alberta played hard and had a lot to be proud of.  “I couldn’t have asked for much more from this group of athletes,” said James, “We learned a lot about the how the game should be played over the last couple of weekends and I hope the final result will inspire these young players to strive to continue to do the necessary work to improve and keep building.  This may well be the most talented group of 14U girls that have ever represented Baseball Alberta.”

Congratulations to all of the members of the Team Alberta 14U Girls on their hard work and tremendous team spirit.  Also, a big thank you to Jodi Rice and the entire parent group for being so supportive of the team and assisting with what we hope was a very rewarding experience for the players.